Project Quetzal was founded in 2018 by Janice and Bill (see bios below). Between the two of them they have spent many years in Latin America, mostly in Guatemala, Mexico and Ecuador. In recent years their focus has been Guatemala, getting to know its wonderful people and seeing firsthand its crushing poverty. They have learned, and continue to learn, that there is no simple solution to combating poverty but every child who attends school and every mother who learns about the importance of education and nutrition is a giant step to a brighter future. Janice and Bill visit Guatemala 3 times a year for a month or two each time. Their time is spent checking in on existing projects as well as investigating new project possibilities. 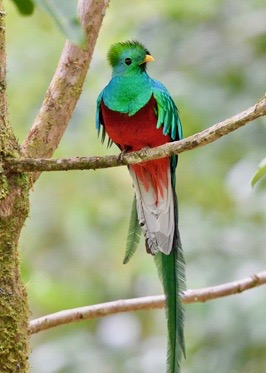 The resplendent quetzal is Guatemala’s national symbol. Quetzal means “beautiful” in Quiche, a Mayan language. This bird has shimmering emerald wings, a small yellow beak and a 3-foot tail with iridescent blue feathers. It is on the flag and is also the country’s currency.

There are many folktales about how the bird got its brilliant colors. According to one story, the quetzal flew down onto a chief’s chest where he was wounded during a battle. When the leader died, the quetzal flew off, his chest covered with crimson blood. The tale recounts that is why all male quetzals have red breast feathers. One legend claims that the quetzal used to sing beautifully before the Spanish conquest, but has been silent since then. It will only sing once again when the land and its people are truly free.

Many artists weave quetzal patterns into their Guatemalan cloth. It symbolizes the spirit of freedom for the Maya, and it is said to die of sadness if it is caged. We chose Quetzal for our name because of its importance and cultural significance in Guatemala.

We aren’t blind to the problems facing the vast majority of Guatemalans. Over 50% of Guatemalans live below the poverty line making the possibility of adequate nutrition and education very difficult, if not impossible, for many families. We can alleviate some of the suffering and hardships families face on a daily basis by establishing our own educational projects and collaborating with other nonprofits. We believe that lasting change can only come when the community is involved. Project Quetzal provides hope to parents that their children can be healthy and can go to school; and that they can help improve their lives and their children’s lives.

Therefore, we focus on education and nutrition. Access to education is the change that the world needs, that Guatemala needs. Couple that with good nutrition and little by little Guatemalans can make meaningful improvements in their quality of life, now and into the future.

Bill English: In the mid-1980s Bill started traveling every chance he could find, especially to Latin America. He lived most of the ‘90s in Chiapas, Mexico, which is on the border with Guatemala and traveled to Guatemala many times. Upon settling his father’s estate in 2010 Bill ended up with a sum of money from that estate. Being that he was comfortable with his income and lifestyle Bill decided to look for places to donate the money he received. That took him to researching nonprofits on the internet and then to Guatemala to personally follow-up on nonprofit organizations that fit with his beliefs and goals to try and make a positive change in people’s lives in Guatemala. For the last 6 years Bill has spent many months per year living in Guatemala working alongside his favorite NGO’s in that country. Project Quetzal was born to keep alive that ability to fund projects and contribute to improving the quality of life for as many people as possible in Guatemala. 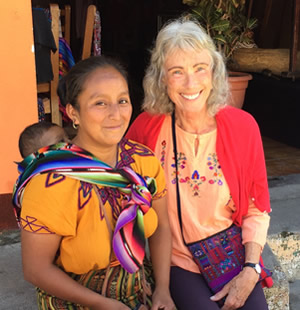 Janice Stradford: Janice has been an educator in the field of ESL (English as a Second Language) for over 30 years; and has always had a tremendous interest in other cultures. She currently teaches part time at Santa Rosa Junior College in northern California. As an ESL teacher, the world has always come to her; but now as a part-time instructor, she has the opportunity to volunteer in Guatemala where the need is great. During her visits to the Guatemalan highlands over the past 3 years, she has loved learning more about the incredible Mayan culture. She is passionate about helping the indigenous children, women, and families gain access to more programs and develop skills to effect changes in their lives and communities. She admires the resourcefulness, spirit, and generosity of the Maya people, and is grateful to be able to work with them in creating more opportunities through Project Quetzal.

Susana is a native of Lima, Peru and has more than 30 years of experience as a Spanish professor, community educator and international human rights advocate. While working for the San Francisco-based NGO International Development Exchange, she helped develop partnerships with grassroots organizations in Mexico, Guatemala, and Nicaragua whose focus was to create sustainable solutions to the inequality and injustice afflicting their communities. In addition, she led solidarity delegations to Central America documenting and implementing strategies for the protection of human rights. She is inspired by Project Quetzal’s vision to strengthen the power of grassroots groups and indigenous women in their efforts to ensure their communities gain access to adequate health, education and food security.

Native of Lausanne, Switzerland, Monique spent most of her childhood in Lesotho, a small independent country entirely surrounded by South Africa. Life there was simple, without all the trappings and conveniences of developed countries, and she grew up intimately aware of issues related to poverty, malnutrition and social injustice. Throughout her forty-year nursing career in Switzerland and California, Monique has dedicated herself to championing the rights of immigrant and underserved people. She is passionate about the role nutrition plays in health and disease, and about supporting relief organizations such as Project Quetzal that create positive change in this post-colonial world.

Susan became interested in foreign cultures as a young adult, traveling to Guatemala for the first time in college. This established her lifelong interest in the Mayan culture. She worked as a health educator for the Sonoma County Department of Health Services and managed older adult programs for the Human Services Department. Her focus was often working with the Spanish-speaking communities. She has been teaching English as a Second Language for over 30 years and currently teaches at Santa Rosa Junior College. She is excited that programs implemented by Project Quetzal are making a difference in the lives of many Mayan families.

Richard grew up in Southern California and began traveling to Mexico with his parents, camping and skin diving. This inspired a life-long interest in Spanish and Latin culture. Graduating from UC Davis in 1973 Richard went on to get a credential in bilingual education. In between teaching ESL at Lincoln Elementary in Santa Rosa he received a second degree in business management from Sonoma State University. Other jobs included teaching Adult GED in Spanish for SRJC and working as an interpreter for Sonoma County Special Ed. The last 13 years of retirement has allowed him to learn sailing and traveling often to Guatemala and other Central American countries. He is excited to be able to do his part to help the children of Guatemala through Project Quetzal.